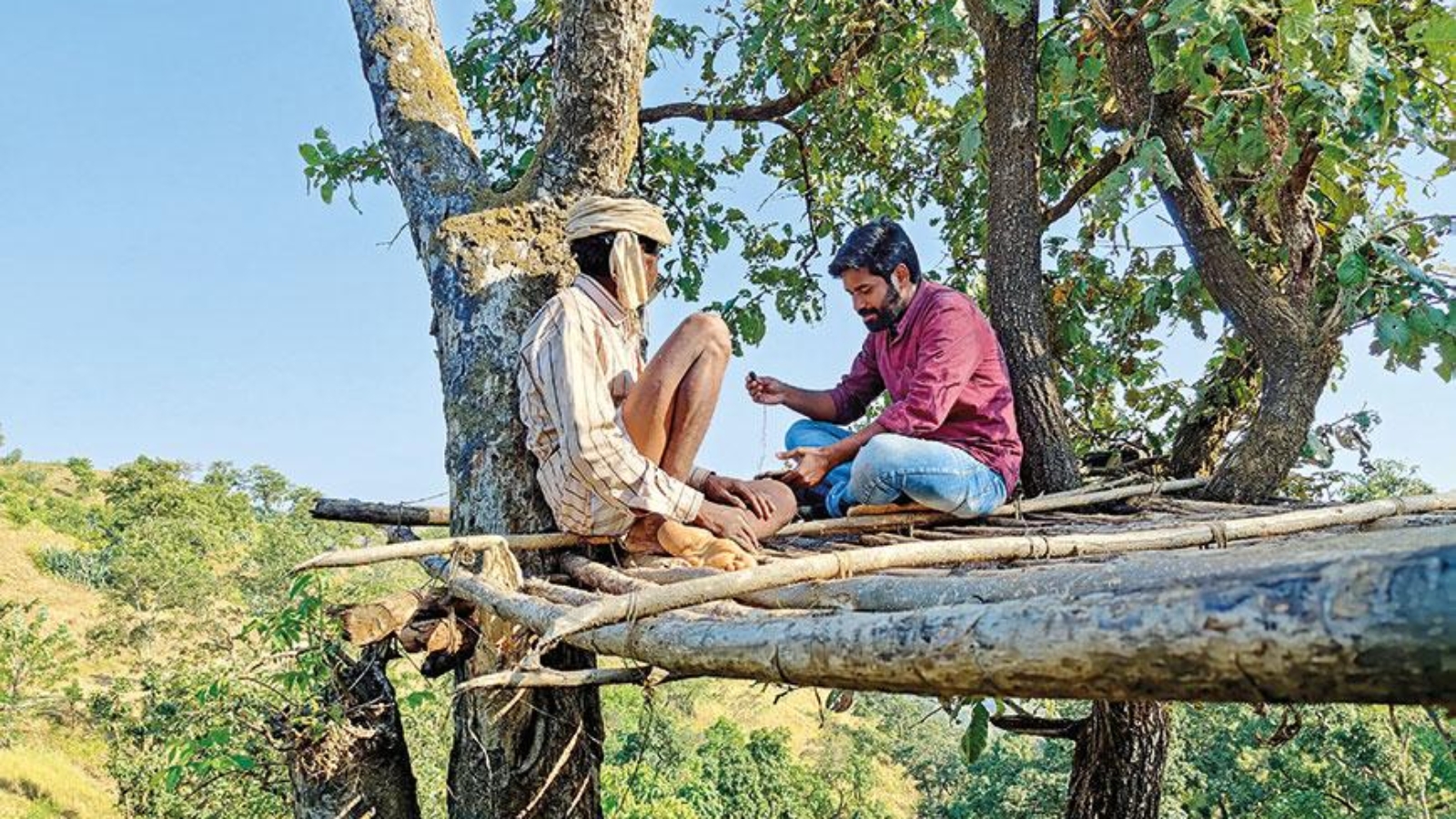 HOW do you get hesitant villagers in backward nooks of the country to turn up for COVID-19 vaccination? Ask Aadiwasi Jan Jagruti, a feisty group of volunteers in Dhadgaon block of Nandurbar, a tribal district in northwest Maharashtra. Using mobile phones, they make short videos on government schemes, civic issues, social issues and more so that people get apt information in their own language from their own people.

The group was quick to pick up misinformation spreading in Nandurbar on the novel coronavirus and vaccines. They took on rumour-mongering by debunking fallacies through their short films. Information was downloaded from the WHO website and the Ministry of Health’s website and converted into videos in local languages.

Aadiwasi Jan Jagruti was started by Nitesh Bhardwaj, who came to Dhadgaon in 2016 as an SBI Youth for India fellow. He realized that people didn’t access government schemes because they just didn’t know about them. This, in turn, led to corruption. Development funds did not get to beneficiaries. Aadiwasi Jan Jagruti’s aim was to ensure government benefits reached the last mile.

Bhardwaj was joined by Arjun Pawara and Rakesh Pawara, locals from Nandurbar. While Bhardwaj had studied journalism and development communication in Delhi and Dehradun, Arjun is doing a Ph.D from North Maharashtra University. Rakesh works as cluster manager in a rural livelihood mission run by the Maharashtra government.

Aadiwasi Jan Jagruti volunteers include teachers, vegetable vendors, kirana store workers, farmers and students. Their average age is 25 to 35. They also have enthusiastic 12-year-olds acting in their films and an elderly 70-year-old ‘kaka’ who enjoys playing a role or two. The videos are in Marathi, Hindi and in local dialects — Pawari, Bhilori and Ahirani.

“If you have a celebrity speaking in Marathi, dressed up in a suit, people will not pay heed especially when it comes to matters of significance. But when one of our volunteers, a familiar face wearing familiar clothes, speaks in their language, people will listen,” says  Bhardwaj, with confidence born from experience.

“For a malfunctioning electric pole, you don’t need big media. You need hyperlocal journalism. Similarly, we need local authorities to act on these problems,” he says.

Nandurbar, an aspirational district with low human development indicators, has often been a pilot for government schemes. The first Aadhaar card was issued to a woman from this district in 2010 by former Prime Minister Manmohan Singh and Congress President Sonia Gandhi. But due to lack of information and low connectivity — some villages don’t even have 2G network — people did not know about their entitlements.

Bhardwaj began by starting a newspaper called Jagruti in Hindi and Marathi in Janardhan Poharya Vadwi College in Dhadgaon. He soon realized the need to reach a wider audience beyond the gates of the college. Students suggested films. So Bhardwaj conducted a seven-day camp to teach screenplay writing and the basics of making a film using a mobile. Their first production was a two-minute film on child labour. Many students felt personally connected to the theme since some of them had worked in restaurants and hotels.

In 2017, Bhardwaj and his students made a 14-minute film on toilets and defecation linked to the Swachh Bharat Mission. The film caught the attention of Dr Mallinath Kalshetty, then district magistrate of Nandurbar. He took part by conveying a message in the film. Dr Kalshetty suggested showing the film in villages with a mobile projector during Self-Help Group (SHG) and panchayat meetings.

“Initially people came to watch our films solely because the children of the village were acting in them. It served our purpose since the message was getting across,” says Bhardwaj.

Along with his two co-founders, Bhardwaj registered their non-profit. They named it Ulgulan for Social Change Foundation. Ulgulan means ‘revolution’. The title was suggested by their volunteers.

One golden rule the group follows is that any film for a village must be made by volunteers of that village since they would know the issues facing the community and what will resonate with it. Volunteers from specific villages pitch ideas and, together with Aadiwasi Jan Jagruti, create content.

Due to COVID-19 it’s not possible for volunteers to show their films at panchayat meetings so they disseminate the films on WhatsApp and YouTube and by sending volunteers into their own hamlets to show the videos on their mobile phones. The success of the films has attracted more volunteers to the group, a sign of growing trust.

One major reason Aadiwasi Jan Jagruti’s films are supported by the people is that they have impact. People from Aamkhedi approached Aadiwasi Jan Jagruti about the lack of water in their village. The women had to walk nearly four km to fetch water. The volunteers filmed a short documentary on the village’s water crisis to draw the attention of the administration. The upshot was that the gram panchayat of the area was allocated money for intalling six borewells.

“We realized that to truly act as a bridge between the government and the people, we can’t just tell people about government schemes. We have to, alongside, convey people’s issues to the government,” says Bhardwaj, recounting the incident.

People also informed Aadiwasi Jan Jagruti about corrupt practices.  One of the issues that they faced was that mini-banks in Nandurbar district were charging a fee for every withdrawal transaction, which they were not supposed to. With the help of Aadiwasi Jan Jagruti, people filed formal complaints with SBI which, in turn, suspended 10 to 11 licences of mini-banks in the area. This had a ripple effect. No mini-bank now charges extra fees. “They have also started putting up boards outside their outlets reading ‘We don’t charge a fee’ to inform people,” says Bhardwaj.

The group seeks amicable solutions to corruption. “Our aim is not to fight with the people. The tone of our films is gentle. Our main concern is that people should be aware that they do not have to pay bribes and that they have certain rights.” The volunteers live in the villages and are part of the community. The team ensures they don’t antagonize anyone. “The people are our biggest support,” says Bhardwaj. He concedes it’s hard to keep everyone happy when you are campaigning for social justice but the group has built a relationship with the local government which too has recognized the value of their work.

Currently, the group is dispelling the distrust and conspiracy theories surrounding the vaccines in the district. They helped out teachers on a vaccination drive. The zilla parishad sent teachers into villages in Nandurbar to spread awareness of vaccines. They faced a negative response. People did not want to be vaccinated. Discouraged, they approached Aadiwasi Jan Jagruti.

The team put together videos of local representatives, village doctors, respected individuals and seniors of the community talking about the importance of the COVID vaccines in local languages. Before talking to villagers, teachers now use those videos first. The tehsildars and local doctors have noticed an increase in vaccination since then.

The group also spotted a problem in distribution of rations. Since people were unable to collect their rations during the lockdown, they would come later only to find that their rations had already been picked up by someone else in their name. So the volunteers are now making films to document and work on this issue as well.

Bhardwaj says the first hurdle is of building a relationship of trust with the community. This they managed to do because of the credibility they built up. “People know that if we pick up an issue, we will get it resolved. Something that might have taken years, we try to get it done within six months,” says Bhardwaj.

Sometimes volunteers don’t even have to make a film. They can just speak to the concerned authorities because they have now managed to create a two-way flow of trust and communication between the people and the administration.

Aadiwasi Jan Jagruti is supported by advertisements of local businesses and stores. They also have a YouTube channel, which contains their short films and documentaries. The channel has 7,000 subscribers and a viewership that helps as a revenue source. Financial hurdles do arise sometimes.

They pay 70 percent of any revenue they receive to their volunteers. The remaining 30 percent is kept aside to meet the cost of upkeep of their organization and for further projects.

Political obstacles do crop up from time to time. Aadiwasi Jan Jagruti is also mindful of stepping into sensitive issues.  But they do want to gradually address the gender issue. They recently went ahead and made a film on a self-help group which was making reusable cloth sanitary pads. The volunteers have become more politically active. Some hope to participate in politics to bring about change. Both villages and volunteers are more aware now and try to access government schemes.